Newton’s First Law states that an object will remain at rest or in uniform motion in a straight line unless acted upon by an external force. It may be seen as a statement about inertia, that objects will remain in their state of motion unless a force acts to change the motion. Any change in motion involves an acceleration, and then Newton’s Second Law applies; in fact, the First Law is just a special case of the Second Law for which the net external force is zero. 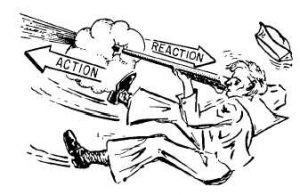 Newton’s third law: All forces in the universe occur in equal but oppositely directed pairs. There are no isolated forces; for every external force that acts on an object there is a force of equal magnitude but opposite direction which acts back on the object which exerted that external force. (http://hyperphysics.phy-astr.gsu.edu/hbase/Newt.html)

Get Kahoot and create your own review games!

Get a Quizlet account and begin making your own review games